Salah had gone six league games without scoring until he broke West Ham’s resistance in the second half with his first goal in the competition since December.

The 28-year-old followed that fine strike with another eye-catching effort and his masterclass ensured Liverpool made it two successive league wins.

Salah is the first player to score at least 20 goals in all competitions in four consecutive seasons for Liverpool since Ian Rush in the 1980s.

“What Mo made of Shaqiri’s pass was incredible. The first touch was unbelievable,” Klopp said of Salah’s second goal.

Liverpool are four points adrift of leaders Manchester City, who have a game in hand, and one behind second placed Manchester United.

After five league games without a win, the champions showed signs of emerging from their winter slump in Thursday’s 3-1 success at Tottenham and this was another step in the right direction.

“These boys are a really good group. They’re not happy at not being successful. They always have the right attitude,” Klopp said.

“We spoke about it in the last few weeks and maybe in the last week we have spoken about the right stuff.

“We have found a way to be uncomfortable again for other teams. It was a great game, very professionally controlled against a flying side.”

Liverpool’s previous away league wins this season had come at Chelsea and Crystal Palace and they inflicted more capital punishment on West Ham in their latest trip to London.

But Liverpool squashed that streak emphatically, proving that the group who swept to the title last season shouldn’t be written off yet.

The Reds are rounding into form just in time for next Sunday’s crucial clash with Manchester City, which is preceded by a home game against Brighton on Wednesday.

Liverpool forward Sadio Mane was absent due to a muscle injury suffered against Tottenham, while Roberto Firmino was left on the bench as Divock Origi and Xherdan Shaqiri started in attack.

At least Liverpool’s full-backs remain healthy and Andrew Robertson combined with Trent Alexander-Arnold to set up Wijnaldum for a shot that flashed just over.

Liverpool didn’t manage a single shot on target until first half stoppage-time when Salah’s speculative effort was held by Lukasz Fabianski.

But Salah almost broke the deadlock early in the second half as the Egyptian met Origi’s cross with a close-range shot that was blocked by Aaron Cresswell’s last-ditch challenge.

Antonio was inches away from putting West Ham in front on the counter, the forward shooting just wide on the turn.

Salah finally ended his drought in the 57th minute as he took Curtis Jones’ pass in the Hammers area and showed typically deft footwork to open space for a superb curler into the far corner.

West Ham had no answer for Salah’s clever movement and he put the result beyond doubt in the 68th minute.

Picked out by Shaqiri’s brilliant long pass into the area, Salah controlled superbly before clipping a clinical finish past Fabianski from close-range.

Firing on all cylinders now, Liverpool struck again in the 84th minute when Wijnaldum capped a flowing attack by tapping in Firmino’s pass. 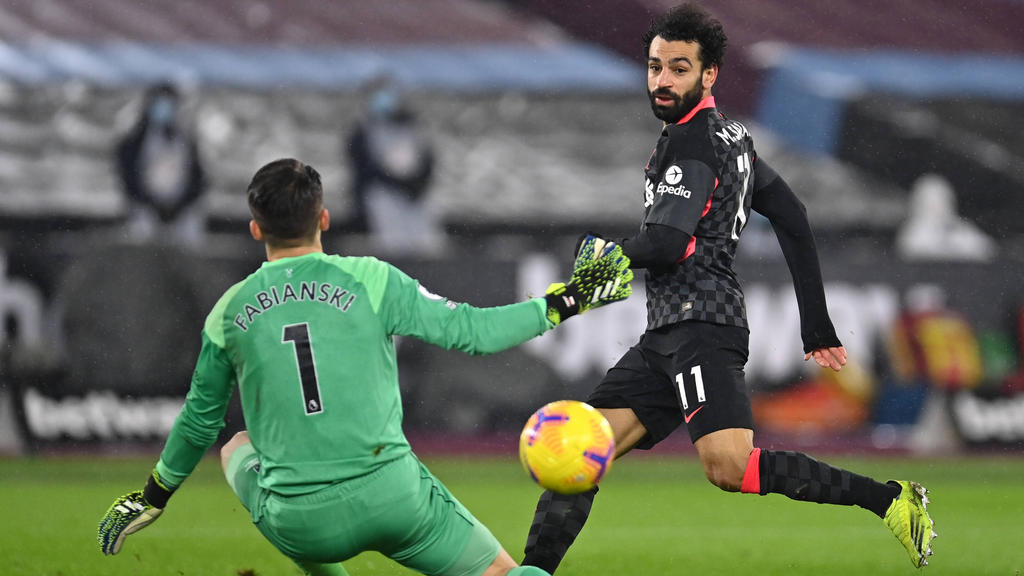